The trip across South Carolina went quickly and mostly in silence.  The traffic increased as we neared the Charleston exit.

Seven hours in the car and we were both still alive.   But, that’s all I can say about it.  I watched trees, listened to Chris complain about the road construction and felt generally miserable about this entire trip.  Why didn’t he just move out of my house and in with Kathy?  Why did Lillian make us do this?

“He is in so much trouble,”  Chris said, suddenly.

“Who?”  I asked, whipping my head around to face Chris. I stilled fumed at him and his lack of responsibility and had no clue what he was talking about.

“That guy in the pick-up in front of us.  He has a dresser back there that isn’t tied down and the drawers have come open.  Stuff is blowing out.”

I watched a pair of jeans fly out of the back of the truck and land in the weeds beside the road.  Then, a sequined blouse came out of the drawer to flutter down and get snagged on a tree.

“I hope she has clothes somewhere else, or she will end up naked,” I said.

“Oh, my,”  I said.  Then, a red peignoir flew out of a drawer.  “No sexy nighty for him.”  I held up my phone and began taking pictures every time a clothing article flew out of the back of the truck.

“That guy has no idea this is going on behind him,”  I said, as a pair of black lacy panty hose flew out of the dresser.

“It could be his clothes,”  Chris said and in spite of my anger, I laughed out loud.  Every time another clothing article flew out of the dresser, Chris and I laughed.  We watched bras, panties, blouses and jeans fly away.

Several miles passed and just as I was going to announce the dresser was finally empty, a fuzzy white sweater blew out of the back of the pick-up truck, sparking another round of hilarity.  Even though the laughter had an hysterical edge, it felt good.  Little in my life seemed funny for more than a month.  The man exited at the interchange for Brunswick.  So went our entertainment.

“You would think he would turn around once in awhile,”  Chris said.

“Or at least look at his mirrors,”  I said.  “But, it was really funny when that peignoir got hung up in a tree and that blue sequined blouse.”

“It will be even funnier when she makes him go back to get everything,”  Chris said.

“He is in for a long night,” I said. We laughed again.

After a few more miles, Chris said, “I am stopping at the first hotel in Florida.  We need to figure out where we are going from there.  Maybe we can share a pizza.  Lillian only gave us one credit card for the trip and I can’t eat a whole delivered pizza myself.”

“Okay, but we are getting separate rooms.  Plus it has to be a hotel that accepts pets.  Snow stays with me.”

“Fine by me,”  he said as he pulled the car onto the shoulder of the road so we could take another selfie at the Welcome to Florida sign.  This time, we had small smiles that didn’t reach our eyes.  Snow barked at a car that passed because a Blue Tick Hound had his head stuck out of the window and his tongue hanging out.  Just saying howdy to the passersby. Maybe she was interested in him.  Don’t do it, Snow.  Men are nothing but trouble. 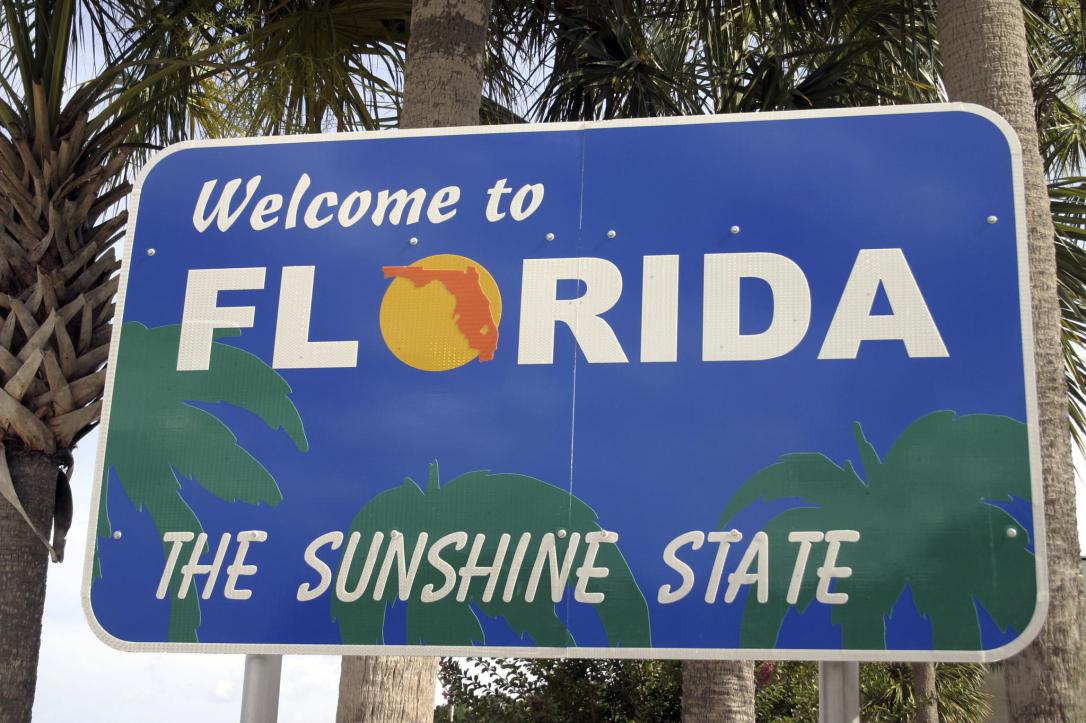 I was born in the 1950’s, live in a 126-year-old house in Virginia, I am retired and spend a great deal of my time writing. I have lived through the Kennedy assassination, civil rights, Neil Armstrong on the moon, and 9/11/2001. I have seen the Vietnam war, the war in Middle East, the war on drugs, Star Wars, and the war between men and women. I have written hundreds of short stories and essays and a handful of novels. Only one novel was (self) published and one poem published in a collection. I have been a writer my whole life, creating my first stories when I was still in elementary school. View all posts by KarenPopeWrites